The following article was submitted as an assignment for the Vedic Astrology Apprenticeship Program, by Vincent Tamer. In it you will find an excellent description of introductory chart analysis, focusing on the Bhavas or Houses of Astrology.

“If the second lord is endowed with strength, the native will possess beautiful eyes, if the lord is in the 6th 8th or 12th there will be disease or deformity of the eyes.”  -Brihat Parashara Hora Shastra

The astrological text Brihat Parashara Hora Shastra provides a wealth of information on the determination of the well being of a house in a chart. There are countless yogas, combinations of specific planets and positions, as well as the Avasthas — the different states of a planet that indicate its karmic fruition and strength. There are also Parashara’s notes on the prosperity and annihilation of a house, which provides the astrologer with a baseline in determining how a house flourishes or languishes.

For determining the prosperity of a house check for the following:

For determining the annihilation of a house check for the following:

Following these guidelines will allow the astrologer to make an initial assessment of a house and from that point, take into consideration other variables in the chart to fine tune the analysis. Here we will use the chart of the late artist David Bowie, whose voice, fantastic persona and peculiar stage antics propelled him into fame and accomplishment. Within his chart the 7th, 10th and 12th houses are most pronounced as they receive manifesting influence by Mercury, Jupiter or both planets at the same time, as well as the respected house lords. When the house lord aspects its house, it sees that house and everything in it; it can direct the activities of the house more effectively this way.

The 7th house, dealing with the spouse, sex and commerce, is prominent in Bowie’s chart. It is aspected by Mercury (manifesting influence) and its own lord, the Sun, from the 12th. While both planets can be considered cruel (Mercury is in association with malefics), they still count towards the well being of the house. The 7th not only deals with the spouse, but with everything that is outside of the self; it deals with exploration, novelty and exchange.

Bowie had an Aquarius ascendant, ruled by Saturn. Placed in the 7th house the ascendant lord indicates that the native will find himself drawn to relationships and that an interest in sexuality will be prominent. While Bowie began playing music at a young age, it was only in his mid 20’s after several attempts that he became recognized for his talent.  Saturn, natural significator for the 6th house (delay) is in great enemy dignity and is joined in a close conjunction by the 6th lord Moon (although it is waxing therefore benefic). It was Bowie’s first spouse who encouraged him to adopt an androgynous appearance and costume. Through the freedom gained by invoking a persona other than his own (1st lord in the 7th) his stage persona became strange and original and his shows drew large audiences. It is also interesting to note that the Moon indicates the left eye of a native and in his teen years Bowie fought with a friend over a shared love interest. He was punched in his left eye, leaving it disfigured and giving the impression that his eyes are two different colors. This actually enhanced the mystique aura he was creating; note the benefic Jupiter rasi aspecting the 6th house from the 10th, who blesses the injury to his favor. 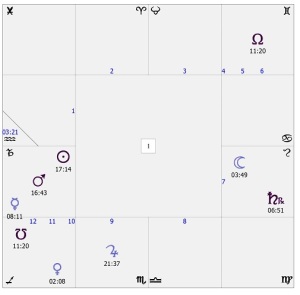 The 7th house and 1st/12th house lords interchange signs in the chart as well as rasi aspect each other. This helped David Bowie’s purpose to become singular, allowing him to explore the products of his imagination without restraint. The 12th house contains the 7th lord Sun in yuva/adult state, therefore strong despite poor dignity, along with Mercury, a manifesting influence. With them is exalted Mars, lord of the 3rd (skills, musicianship)  and 10th (career). On the negative side, the 7th house lord is with a malefic (Mars) and is also with the lords of the 3rd  and the 8th. The 7th lord is also in sushupti avastha (sleeping state), which adds confluence to the aforementioned delay to Bowie’s success finding his outlet for creativity. Having the lord of the 7th in the 12th so closely conjunct with a powerful Mars indicated the end of relationships due to the pressures of his ambitious career. Again, the sleeping state of the Sun illustrates why his first marriage lasted so painfully long before eventually terminating. The state of alertness

(Jagradadi avastha) of a planet illustrates how aware the native is of the indications of the planet itself. It was later in his life, after his career had been fully established, that Bowie found the right partner. While an inconvenience, these sudden losses were necessary to further his artistic potential, as depicted by 5th and 8th lord Mercury residing in the 12th. He managed his creative image with dramatic and sudden identity transformations that colored the timeline of his career. So, while there is major malefic activity impacting the 7th house it is clear that the indications for prosperity outweigh those of annihilation. Noting the amount of positive or negative influence is just the beginning, after all it is the malefic planets that motivate action and allow us to endure hardship and push through obstacles.

Bowie’s 12th house is a major source of his creativity. The 12th house  is rasi aspect by Moon and Jupiter (benefics). Saturn, the house lord, rasi aspects in kumara/adolescent avastha and both Mercury and Jupiter(manifesting planets) are with the house, residing in it and aspecting it respectively. Saturn is in great enemy dignity and asleep avastha, and does reside with the 6th house lord. In addition, there are cruel planets in the 12th and they do rule over evil houses (as illustrated in the previous segment). All of this adds confluence to the aforementioned troubles and expenses with his career and initial partnership. While on his path Bowie lost a tremendous amount of money (Saturn is 1st/12th lord). He received loans from record companies to fund his tours and was stuck paying back the negative balance for some time. However, the indications of the house still come through successfully due to very powerful planets, both malefic and benefic. Saturn must be seen from all angles; for it is most importantly the ascendent lord, which represents the body of the native. The ascendent lord will do its best for the chart in order to move the native along on the life path set out for them. Its ability to do so however, will be augmented based on its affiliations and afflictions.

The importance of Mars needs to be stressed, as it is one of the two planets that pulls the whole chart together. Again, Mars rules the 3rd house, which can indicate impulsivity or recklessness. For this reason the 3rd house is often relegated to the position of a minor evil house, but it also indicates talent, performance and bravery, all of which is crucial for an artist to be considered avant-garde. Mars also rules over the 10th house of activity and career and is in excellent strength being in its exaltation, adult state (yuva) and wide wake (jagrat). Having such a powerful influence rasi aspecting the other angular houses puts the major areas of life in motion to serve the dreams of the native. Here the planet explores the themes of otherworldliness and fantasy, which color the artist’s songs and performances. Thus, the 12th house serves as  Bowie’s source of ethereal power and motivation, harnessed by a very strong Mars combust the 7th lord (motivation to explore).

Bowie’s 10th house is home to benefic Jupiter, his Atma Karaka (significator of the soul), and both 2nd and 11th house lord. Having the lord of both wealth houses in the 10th house of activity and career depicts that the means of gaining wealth, resource and fulfillment come through the use of the voice in the public eye (throat and voice ruled by 2nd). While Bowie was an accomplished musician it was his voice and unmistakable image that truly made him unique and famous, Jupiter being his Atma Karaka indicates that this was his soul’s intention. A yoga in Parashara’s chapter, “Effects of the Second House and Wealth” apply to this placement of Jupiter: “If the second lord is in the 11th while the lord of the 11th is in the second, wealth will be acquired by the native. Alternatively these two lords may join in an angle or trine.” After the initial setbacks and debts during the formation of his career Bowie enjoyed wealth and stability until the end of his days. Jupiter is also in great friend dignity and in kumara avastha which increases his strength and ability to benefit the 10th as well as bestow a graceful touch to the houses he aspects: the 3rd, 6th and 12th. These houses have bad reputations, especially the 6th and 12th, so having a strong benefic aspect directed Bowie’s talents and impulses (3rd) as well as his imagination and grand ideas (12th) and allowed him to rise up to fame without any further delays (6th). Perhaps without the bright beacon of Jupiter in the midheaven of the chart, guiding and containing such volatile forces in the 12th house, Bowie’s life would have been in severe oblivion.

The 10th lord Mars rasi aspects his own  house along with Mercury, adding to the 10th houses manifestation ability and increasing the potential for prosperity. Following Parashara’s guidelines we can see that the only negative influences to the 10th come from malefic aspect from the 12th house (Mars, Sun and Mercury), two of which were just counted in favor of the chart prospering. Again, the role of the planets must be inspected carefully. David Bowie’s chart is quite exciting. With a weakened first house lord and malefics in the 12th house it could initially seem like a problematic chart. However, aided by two strong motivating planets, Jupiter and Mars, the indications of the three key houses come together in eventual harmony to create an outlandish yet prosperous artist.