The Effects of the Shadow Planets of Vedic Astrology, The Upagrahas Part 2 of 3

It is interesting to note that while the Upagrahas are considered shadowy forces that cause destruction and harm to the houses they tenant, Parashara does state that certain places can cause these forces to work well within a horoscope. We will even see that 3 of the 5 Upagrahas of the Dhooma Group often support the qualities of the house they tenant. For the more difficult Upagrahas, the general theme seems to follow the principles that are indicated for most cruel planets to work well.  Cruel planets generally give better results in houses three, six and eleven. These are houses of stress, and to have cruel influences here can give us the power to deal with stress effectively. The crueler Upagrahas also seem to do better near the 10th house, where they are more visible.

The Effects of Dhuma in Houses from Chapter 25 of Brihat Parashara Hora Shastra:

The First House: the native will be valiant, endowed with beautiful eyes, stupefied in disposition, unkind, wicked and highly short tempered.

The Second House: One will be sickly, wealth, devoid of a limb, incur humiliation at a royal level, dull-witted and a eunuch.

Fourth House: Grieved because losing one’s partner, yet learned in all shastras.

Fifth House: Limited progeny, devoid of wealth, be great, yet devoid of friends and Mantras.

Notice the theme of Dhooma’s good qualities.  There are mainly good qualities expressed in the 3rd and 6th houses, and then when Dhooma tenants the highest, most visible portions of the chart, in houses 9, 10 and 11.

Other Names for Vyatipata: Pata

Meaning of Vyatipata: Falling down, disrespect, indicator of calamity.

The Effects of Vyatipata in Houses from Chapter 25 of Brihat Parashara Hora Shastra:

The First House: Troubled by miseries, cruel, destructive, foolish and ill-disposed to his relatives.

Third House: Firm in disposition, a warrior, liberal, rich, dear to a king and head of an army.

Fourth House: Endowed with relatives but not progeny or fortunes.

Sixth House: Destroyer of his enemies, physically mighty and skilled in all kinds of weapons and in arts, and be peaceful in disposition.

Seventh House: Bereft of wealth, wife and progeny, subduer of females, miserable, sensuous, shameless, and friendly to others.

Ninth House: Many kinds of businesses and friends, very learned, well-disposed to his wife and eloquent.

Eleventh House: Extremely opulent, honorable, truthful, firm in policy, and endowed with many horses and having an interest in singing.

Twelfth House: Given to anger, associated with many activities, disabled, not religious and hateful towards relatives.

Notice the theme of Vyatipata’s good qualities.  There are mainly good qualities expressed in the 3rd and 6th houses, and then when Vyatipata tenants the highest, most visible portions of the chart, in houses 9, 10 and 11.

Other Names of Parivesha: Paridhi

Meaning of Parivesha: Fence, enclosure or circumference. Binding point of a sacrifice. Offering. Halo around the Sun or Moon. A crown.

The Effects of Parivesha in Houses from Chapter 25 of Brihat Parashara Hora Shastra:

The Second House: Wealthy, charming, enjoyer of pleasures, happy, religious and a lord.

Third House: Fond of his wife, charming, pious, well disposed to his men, be a servant and respectful to elders.

Fourth House: Wonderstruck, helpful to enemies as well, kind, endowed with everything and skillful in singing.

Sixth House: Famous, wealthy, endowed with sons and pleasures, helpful to all and will conquer his enemies.

Notice how all placements of Parivesha are have positive connotations except the 7th and 12th houses.

The Meaning of Indra Chapa: Rainbow or Indra’s Bow. Bow of Sagittarius.

The Effects of Indra Chapa in Houses from Chapter 25 of Brihat Parashara Hora Shastra:

The First House: Wealth, grains, gold, grateful, agreeable and devoid of all afflictions.

Third House: A miser, versed in many arts, indulge in thieving, devoid of some limb and unfriendly.

Fourth House: Happy, endowed with quadrupeds, wealth and grains. Honored by the king and devoid of sickness.

Sixth House: Destroyer of enemies, happy, affectionate, pure and will achieve plenty in all undertakings.

Seventh House: Wealth, full of all virtues, learned in shastras, religious, and agreeable.

Eleventh House: Gainful, healthy, fiery, affectionate to his wife, and knowledge of mantras, weapons and missiles.

Here we find the most difficulty in the 8th and 12th houses.

Meanings of UpaKetu: Magic, god of love, peacock, above or beyond Ketu.

The Effects of UpaKetu in Houses from Chapter 25 of Brihat Parashara Hora Shastra:

Fifth House: Happy, enjoyer of pleasures, versed in the arts, skilled in expedients, intelligent, eloquent, and respectful to elders.

Sixth House: Cause problems for maternal relatives, win over enemies, endowed with many relatives, valiant, splendorous, and skillful.

Eighth House: Interested in base acts, sinful, shameless, blame others for lack of happiness, and will take another’s side.

Tenth House: Endowed with happiness and fortune, fond of females, charitable and a friend to Brahmins.

UpaKetu’s natural disposition remains positive except in the 7th, 8th and 12th houses.

When are the effects of the Upagrahas felt?

In the chart below we will see that the Moon and Vyatipata are falling in Virgo, within less than a degree of each other.

The proximity of the Moon to this Upagraha puts the Moon and Vyatipata in the same Dasamsa. 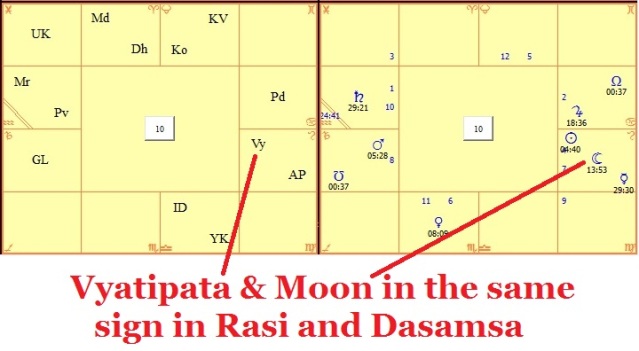 The Moon and Vyatipata are also in the same Trimsamsa.

The reason I focus on these two vargas particularly, is because they are both divisional charts that deal with the power of one’s activity in the world (D10) and the general capacity for fortune and misfortune (D30) as we live in a human body.

To gain deeper insights into the vargas, please review the following courses:

It was during the Mercury dasha when this person felt the indications of Vyatipata in the 11th house.

“Vyatipata in the Eleventh House: Extremely opulent, honorable, truthful, firm in policy, and endowed with many horses and having an interest in singing.”

The best period occurred during the Mercury/Moon cycle which began January 16th 2001. This activation occurred due to the fact Vyatipata was in the Sign of Virgo, and also so closely conjunct the Moon, so as to be placed in the same signs as the Moon in both the D10 and D30.

The individual garnered some success in their singing career and earned more money from their art than at any other time. If it wasn’t for Saturn and Ketu being in the ascendant, and 10th lord being in the 8th in the rasi, and the ascendant lord being in the 8th with the 10th lord, they may have had a more prominent career.  However, the best time of their life occurred during Mercury/Moon, and to them it was heavenly success, after much struggle to succeed.

In the next blog post we will consider the KalaVelas.